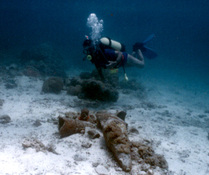 The institute is currently developing a number of research projects in the Red Sea region.

Perhaps foremost among these is the shipwreck project at Black Assarca Island, Eritrea. This was begun in 1997 as a project of the Institute of Nautical Archaeology with Dr. Pedersen as the Principal Investigator and director.  Due to circumstances, the project has been on hiatus for years, but now is on track to resume in 2017, beginning with a re-study and re-documentation of the artifacts excavated in 1997. The shipwreck contains ceramics originating, at least in part, in Byzantine Aila, now Aqaba, Jordan. The wreck is the oldest yet excavated in the entire Red Sea and has yielded insights into the sea-borne commerce of late antiquity.  The wreck appears to have carried as its principal cargo a large number of Aqaba amphoras.  These jars are believed to have been the main type of transport container of Aila, and may have carried wine, fish sauce, oils or other agricultural goods. While dates for the amphora type are difficult to derive, it is likely the ones at Black Assarca date to around the sixth century.

More information as well as a gallery of artifacts can be found at http://sites.google.com/site/wedigboats/.
Also two articles concerning the site are posted on our institute's web site under "publications & papers." 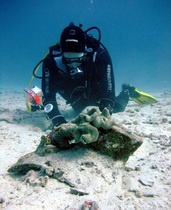 We are also planning the next season of our survey in Saudi Arabia. Begun by our vice president Rupert Brandmeier, and run in 2012-2013 at Phillips-University Marburg, the survey has found one terrestrial harbor site and two shipwrecks. One of these contains late Roman-era ceramics dating to around the 5th century, and other has ceramics of more or less of the same period but the cargo appears to originate in Roman/Byzantine Aila, now Aqaba, Jordan. This latter site has amphoras similar to those found at Black Assarca Island and is now part of a small but growing corpus of underwater sites around the Red Sea containing trade goods from Aila. The presence of these wrecks, the first ever archaeologically discovered in the Jeddah region, bring to light late antique shipping in an area known to have been shunned by the Greeks and Romans due to its dangerous reefs, barren coasts, and pirates, although it is known from the Koran that the pre-Islamic peoples of the area sailed on the sea by day and by night.

For more information please visit our publications page.
Use of our photographs and other illustrations are by permission.
Please contact us.